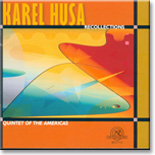 A twenty-five year association with Karel Husa that began at the group’s debut recital when the composer came to NYC to conduct the Quintet and a chamber group of strings, xylophone and harp in his Serenade, has culminated in the release of a new CD called Recollections, the wind chamber music of Karel Husa.  Recollections is also the title of one of the works on the CD, a sextet for quintet and piano where the Quintet is joined by David Oei. Also on the CD is Deux Preludes and Five Poems, a commission by the Quintet funded by the Koussevitzky Foundation of the Library of Congress.

Five Poems was composed in Florida in 1994. Husa has written about the work “The five poems - the third preceded by a short interlude (Lamenting bird) - express my admiration for these wonderful creatures, who embellish our lives so magically. They are only imaginary poems (there are no words, as the poems have not been written.) The suggested titles give the listeners free imagination. Musically I have tried to bring some new possibilities of techniques and sound combinations and also to bring out the present virtuosity of woodwind performers.”

The work opens with a march-like movement, the short notes perhaps giving image to shore birds pecking at the sand or city pigeons parading.  In the second movement the clarinet expresses the “happy bird” with an extended cadenza-like part. The oboe expresses the lament in the interlude and the horn in the third movement sounds the grief over the dead bird as Husa makes use of the technique of echo horn, perhaps expressing both the outer objection and the inner cry. The fourth movement takes off in a wild fight reaching a climax in an unmeasured section beginning with the clarinet where all the instruments peck and attack and flutter relentlessly. At the point of chaos the instruments combine in a virtuosic climax. The fifth movement, “Birds flying high above,” is an extended gradual crescendo for the whole ensemble calling for great control.

Recollections was commissioned by the New Amsterdam Ensemble for the Dutch-American Bicentennial Celebration in 1982. It consists of six contrasting movements, each exploring various virtuosic aspects of technique of the piano and five winds, as well as new sonorities in the combinations of these instruments. Notable for its extremes in dynamics, the work opens extremely softly with notes plucked inside the piano and the flute entering echoing the sounds and taking over as the solo line. The work is filled with color, a result of Husa’s combinations, adding an instrument at a soft dynamic playing the same pitch as the predominant instrument, or stretching the tones out by adding quarter tone wavers. The piece reaches a tremendous power  at the end of the second movement with relentless hammer-like sounds at a triple forte volume.  The fourth movement has Husa’s characteristic rhythmic drive and the work ends in the sixth movement with a beautiful peaceful oboe solo.

Husa has written “...five instruments and a piano were used for researching new sounds, combinations, melodies, harmonies, forms, unconventionally...The word Recollections should be understood as “remembering for...” It is difficult to describe precisely all ideas, sounds, images, memories which occurred to me. I put together counterpoints in the selection of instruments, dynamics, instrumental colors, tempos and forms allowing the composition to develop from simple tones and to return to them. There are moments distant, marching, joyous, dramatic (sometimes tragic), melancholic as memories, as “recollections” or as if you would read a collection of poem at once.”

Deux Preludes was commissioned by the Iota Chapter of Kappa Gamma Psi.

In Serenade the plaintiff melodies and irregular yet driving rhythms are reminiscent of Slavic folk music. Despite Husa’s use of serialism, the music is tuneful and engaging.  The titles of the three movements are merely suggestive and not entirely programmatic. The work was premiered by the Baltimore Symphony Orchestra in 1964.

The sad phrasing at the opening of La nuit from the 1963 Serenade have a depth and simplicity way beyond the range of most contemporary chamber music, as do the Preludes from 1966. Five Poems from 1994 show that he hasn’t lost the knack. They are evocations of the life of birds that avoid any Messiaenic overtones while extending the wind quintet’s expressive range, again in a quiet way. The Quintet of the Americas strikes the right tone, and Barbara Oldham’s horn playing is a perfect, hypersensitive match for Husa’s eloquent writing in the Interlude here, and everywhere on the disc. Paul Ingram, Fanfare September/October 2004

This {Poems} is one of the most entertaining and moving works I have heard for wind quintet, beautifully handled by this New York-based group....I am particularly moved by Husa’s recent music. D. Moore American Record Guide July/August 2004